When Carmène joined the CLM program, she and her husband were living in Platon Zèb, a remote corner of a neighborhood called Laferyè, one of a series of neighborhoods along the ridge that separates the Central Plateau from Pòtoprens.

When she entered the program, she and her husband, Yatande, had very little. They had purchased goats with money they earned through a cash-for-work program that cut roads from the national highway in Fon Cheval to the catholic church in Gran Boulay. All had died, however, by the time we met Carmène. Yatande was a homebuilder, but his clients weren’t paying him. Carmène was sometimes able to borrow money to set up a small commerce, but she never could build it up into anything. Clients had trouble paying her, and she didn’t manage it well. Though they had sent their four children to school for the year, they weren’t sure how they were going to pay.

By the time she had spent six months in the program, she was advancing quickly. The program uses a special evaluation form at the six-month mark, designed to help us see whether members are on track. Rather than evaluating their progress against graduation criteria, we look a factors that point towards eventual success: whether the member is building friendships, whether she seeks and uses advice from community leaders, whether she has a plan for moving forward, whether she is using the training her case manager provides, and whether her assets have begun to increase their value. Carmène scored 90 out of 100.

And, in fact, by the time she underwent her twelve-month evaluation, Carmène could have graduated from the CLM program. Her family was eating hot meals twice-a-day, they had three times the assets we originally had given them, and she was confident in her ability to move forward. Asked whether she thought that Fonkoze should worry about her, she said no and then explained: “I’m going to keep working hard and to manage what I have so it will increase.” When she graduated six months later, she had four times as much as we had given her, having added a horse, a young bull, and a pig to the three goats, which had turned into five.

She also had begun a small commerce, selling groceries out of her home. Neighbors could buy rice, beans, oil: whatever they needed to fix a meal. It meant that they had a place to turn if they ran out of something before market day or if they couldn’t get to the market for some reason. When she graduated, she decided to strengthen her business by joining the credit program offered by Fonkoze’s commercial sister, Fonkoze Financial Services, or SFF. She became part of a solidarity group of five women. All five were CLM graduates. Together they took out their first loans, borrowing 3000 gourds each.

The business worked well. Though she couldn’t always collect what her neighbors owed her, most of them paid, and she knew that the ones who didn’t were struggling with problems she had known too well.

In 2016, she and Yatande decided to move. Platon Zèb was her home, but he was from Labasti, a market area down the mountain along the main road into Mibalè. They repaired the small bachelor house he had built years earlier on land he purchased as a young man, and moved down the hill. “It is much better for us here. There’s no water in Laferyè. Here there’s plenty.” Yatande is quick to say that he still has work to do. “This is still a man’s house. I haven’t built a woman’s house here yet.” They were, however, careful to install a latrine, complete with a PVC exhaust pipe, just as those that CLM helps members construct.

Carmène’s business grew, but when she moved to Labasti she had to change it. “I couldn’t keep selling out of my home. Too many of my neighbors were already doing the same thing.” She took out a larger loan, and used it to buy beans in markets in Laskawobas and elsewhere where they are relatively inexpensive. She would sell them retail in the market close to her home, but also to other merchants who would sell them as part of a home grocery business, like the one she had once managed. Her most recent loan was for 20,000 gourds, and she was able to take it as an individual loan. “I always repay on time, right in the credit center, and I never cause any trouble. If I did, they wouldn’t have let me take out my loan by myself.”

Carmène’s is an encouraging story, but not all the women who graduated with her in December 2014 are doing as well.

Safine lives in Redout with three of her seven children. She isn’t from Redout, an area along the highway into Mibalè just above Triyanon, the largest town between Mibalè and the ridge. She grew up in Difayi, in Boukankare to the north. She moved to Redout about ten years ago to join a man from there, but he died in Pòtoprens in the 2010 earthquake. She was eventually able to buy a small home with money she earned through a cash-for-work project. “I took a shovel and would clear out the run-off canals along the highway.”

But she did not own the land the house was on, and its owners were constantly trying to get her to leave because she had nothing she could pay the rent with once the cash-for-work dried up. She had almost nothing: no livestock or any capital she could invest in small commerce. On the scorecard that Fonkoze uses to measure poverty, she scored about a low as one could. She could occasionally get rent money from her younger children’s father, a man named Maxo, but he didn’t pay regularly.

That wasn’t the worst of Maxo. He was abusive. Her case manager, Hilaire, had to work hard with her to help her out of the relationship. That work culminated when Maxo attacked her in front of the new home she was struggling to build. Hilaire helped Safine through the process of having Maxo arrested, and then with negotiations with his family, who wanted to keep him out of prison. She eventually received a guarantee that he would leave her alone along with help completing construction of her home.

Hilaire also helped her buy a small plot of land that she eventually built a small home on. She chose goats and a pig as her assets, but they didn’t fare well, because she had no place they could graze. And she was too close to the highway. She occasionally lost a young goat to passing traffic.

She eventually established a small commerce, and easily met the program’s graduation criteria, but struggled throughout the 18 months. She would occasionally have to spend the money she used for her business buying what she needed to take care of her children. Her case manager would then help her get a job in the kitchen of one of the numerous training workshops that the CLM program provides its members. She could then use that money to re-establish her business.

After graduation, she continued to struggle. Her remaining goats died, but she rented a plot of farmland and started to work it. She planted plantains and manioc, crops that would yield both food for her children and something to sell. This year, she’s planting corn as well.

She hasn’t been able to sustain her small commerce. She explains, “I get no help from the children’s father. My commerce has to pay school fees, books, uniforms. It buys sandals for their feet and barrettes for the girls’ hair. It pays for the food they eat.” She occasionally goes to Pòtoprens to work as a maid for a while when she doesn’t know what else to do. But she and her children are healthy, and the children continue to go to school, even if she isn’t yet quite sure how she will pay of the balance she owes for the current school year. 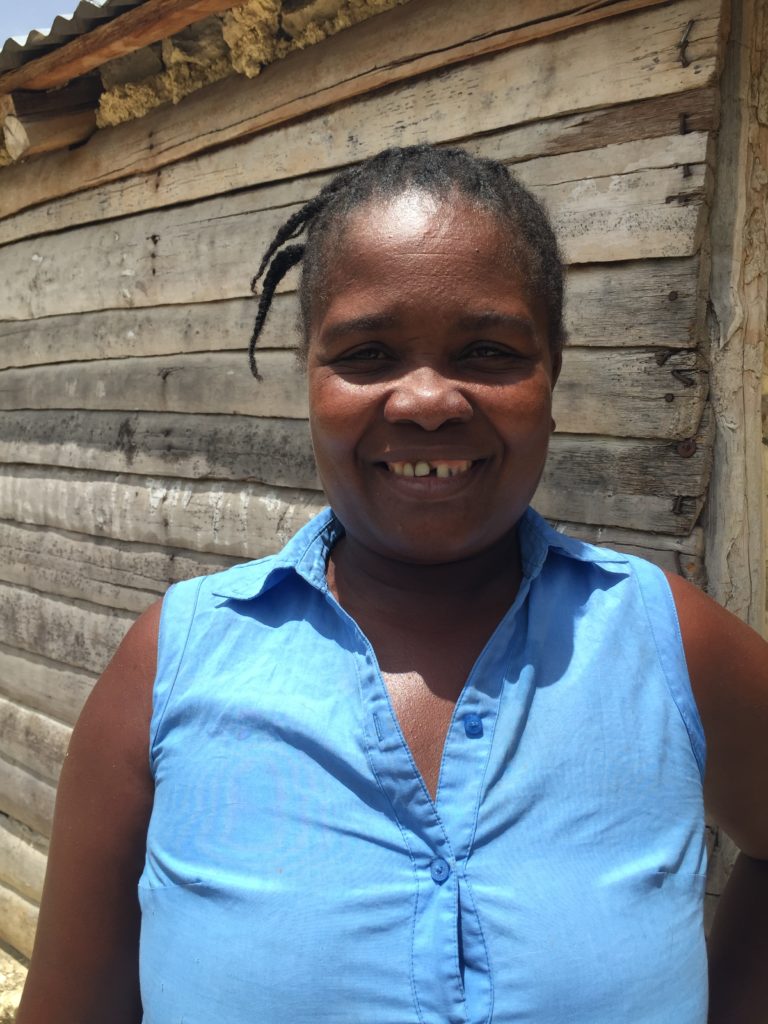