One of the persistent questions we face is what CLM members should be doing after they graduate from the program. They receive eighteen months of close accompaniment from our team, and when they graduate we judge them to be capable of continuing to support themselves. But almost all are still very poor. We believe they will be better able to continue their progress if they are within a supportive structure.

At our program’s inception, we made a simple assumption about the next step. As part of Fonkoze, an institution that has long made microcredit the core of its poverty-alleviation efforts, it was easy for us to think it terms of our own microcredit programs. Even before Fonkoze had established CLM, we offered regular solidarity-group loans to thousands of borrowers and a six-month program of credit and additional support for those who would need extra help to succeed. It seemed natural to try to graduate CLM members into the Fonkoze’s credit programs when they were done with us.

But the results have been mixed.

We have seen many CLM graduates move into Fonkoze credit and then continue to make progress by using it to make their businesses grow. But there are problems, too. Some CLM graduates live in areas that are difficult to serve for a commercial entity that needs to be sustainable. Fonkoze’s credit programs have to break even. They are not supported by donations, the way CLM is. And some areas that CLM serves are just too expensive for credit agents and their supervisors to access. Other graduates succeed in CLM without developing small commerce as a financial activity. They live off farming or livestock instead. They don’t feel a need for credit.

So we’ve been experimenting with alternatives to Fonkoze’s credit programs, and one of the most promising is the Village Savings and Loan Association, or VSLA. It is a process that offers a group of friends and neighbors a way to establish simple financial services on their own.

VSLAs use a strongbox that has three locks. Three different VSLA members keep the keys, and a fourth person keeps the box itself. The box can be opened only at weekly meetings. Savings are made at the meetings by the purchase of shares. Each member must purchase at least one share per week, but may purchase more. Share prices are determined at the group’s first meeting. At that meeting, the group also decides on the size of a weekly contribution to the Association’s emergency fund. Members can then take out loans of up to three times their savings. They repay them with interest in two to three months.

The VSLA functions on a one-year cycle. All the loans have to be completely reimbursed by the last meeting. At that meeting, the whole pot, which includes the balance in the emergency fund, the savings, and the profits generated through interest on loans, is distributed to the members proportionally, depending on the number of shares each has purchased over the course of the year. Members who have not taken out loans profit from the interest that their fellow members have paid. Those who have borrowed money benefit from returns on their own payments.

One of our pilots is functioning in Dolibren, a rural neighborhood in southern Mirebalais, and the response of its members so far has been very positive. They day I visited they were giving their second round of loans, even as the first round of borrowers were making their first payments.

At the start of the meeting, the group’s president brought out the strong box, and the three members who hold the keys came forward to open it. The box holds two separate bags of money. One holds the emergency fund. The other holds the amount of savings that is not out in loans. It also holds a savings book for each member of the group, a calculator, a pen, an inkpad, and a seal. 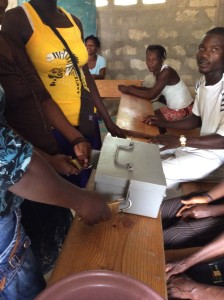 The savings books are then distributed, and members are called forward, one at a time, to make their contributions to the emergency fund. This group had decided they would contribute five Haitian gourds per week, or about ten cents.

After the contributions are counted and verified, members are once again called forward, one at a time, to buy shares. This group chose to set the share price at 25 gourds, and members bought from two to five shares each. The number each purchased was recorded in the savings booklet with the seal. Someone who bought three shares received three stars in their booklet on a line designated for the particular week. Using the seal to record shares, rather than writing the number, makes it easier for even those who cannot read to verify their own booklet. 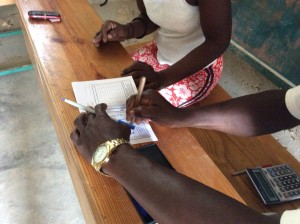 Share purchases are recorded with a small, pencil-shaped seal.

The three members who had received the first set of loans then came forward, one at a time, to make their payments. The repayments went into the savings pot, together with the proceeds from the week’s sale of shares. The elected board then counted the pot so that they’d know how much money they had available for new loans. Three new members took out loans, ranging from 1250 to 3500 gourds. 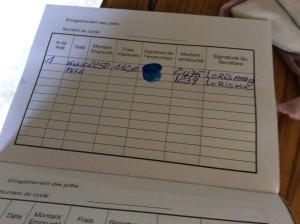 A record of Atelia’s loan and her first repayment in a separate section of her savings booklet.

Finally, the board verified totals in each of the two pots. The pots were returned to the strongbox, together with the savings books and other equipment. The whole meeting took about 90 minutes.

I spoke to Atelia, a member who has begun repaying a loan. She borrowed 1250 gourds to start a business buying sacks of charcoal in the area around her home, and selling them at the Nan Gad market, which overlooks Port au Prince. Her business, she said, is going well, and she reported no difficulty making her repayment. She purchased five shares on the day her repayment was due. “I like borrowing from the Association because all the profits stay with us.” 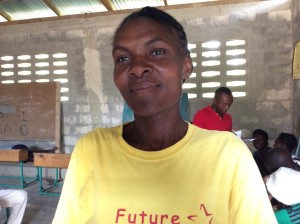 The experiment shows promise. But we will need some time to see whether the VSLAs really succeed. Right now, all three pilots are working smoothly. Too smoothly. None has yet had to manage a problem. There have been no missed repayments. None of the members have faced major issues in their lives. We won’t really be able to evaluate VLSAs as a strategy for CLM until we see how they deal with setbacks. There will be setbacks. But right now, we are excited by what we see.