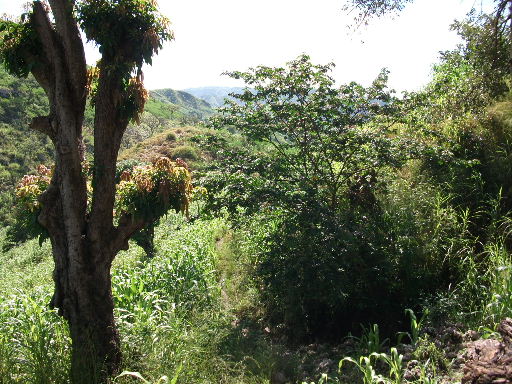 The scenery around Deniza, one of the three main areas of Tit Montayn.

Deniza is the easternmost corner of Tit Montayn. It’s a tough, two-hour hike over a steep mountain pass from Bouli, the region’s central village and the location of our CLM team’s base. Deniza is also accessible by a direct route from Boukankare. The route passes along a waterfall, where it’s steep and narrow enough that pack animals – horses, mules, donkeys – can’t make the trip. They have to go over a higher, but easier, ridge. Deniza is especially mountainous, even compared to the other parts of Tit Montayn, thickly threaded with steep, rocky ravines. Hiking around Deniza is hard work for those unused to it.

But it’s also a populous area with several small villages and plenty of households scattered throughout the farmland that spans the slopes that separate them. There’s been a lot of work for our CLM team to do in Deniza to blanket it with our member selection process. We created a temporary secondary base in Deniza to help us as we conduct wealth ranking meetings and both preliminary and final verification visits.

As always, the final stage of the work involves re-visiting households whose residents were absent the first or second time we went by. It’s frustrating work because you can pass by a house any number of times in vain. Especially right now, when the folks across Tit Montayn are especially busy with their farms.

On my first full day in the region, I was to go with Lenord, one of our case managers, to Mablanch, Pay Diri, and two or three other neighborhoods well over an hour away from our base. I was chagrined when I learned that Jean Romain would not be available to join us. He needed the day to take his daughter down to Boukankare so that she could be measured for her school uniform and he could pay her school fees.

Jean Romain is the newest member of the team. When we decided to enter Tit Montayn, we thought that work in so remote a region would be much easier if we had someone on the team with real local knowledge. Fortunately, we needed a Ti Kredi agent anyway. Ti Kredi is the special credit program for families too wealthy for CLM, but to poor for standard solidarity-group credit. So we hired Jean Romain, who grew up in Deniza as the son and grandson of important local leaders, and he’s been a key member of our team ever since.

Without him, I thought our trip to Mablanch would be a miserable affair. Lenord was not one of the case managers who had been to the houses the first time, so he knew them no better than I did. We could have used the map that was produced at the wealth ranking session, but that would be challenging because the maps tend, in the best of circumstances, to be only moderately accurate and would surely be less so in Deniza, where the terrain is so irregular as to make any mapping hard.

There are no roads in Tit Montayn, only footpaths. Right now, at the peak of the fall harvest, in a year that’s had plenty of rain, the paths are almost invisible if you don’t know them. They’re entirely overgrown with the grasses that cover the uncultivated areas here. It grows over six feet high. Without someone who knows their way around, it’s hard to find anything. 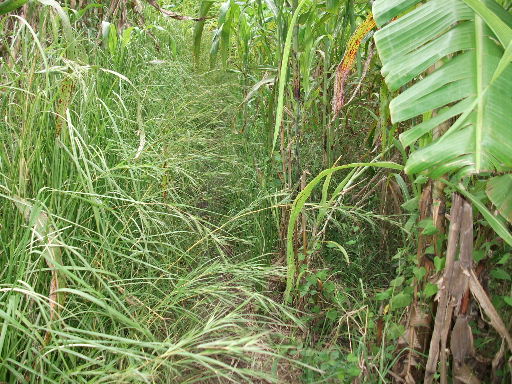 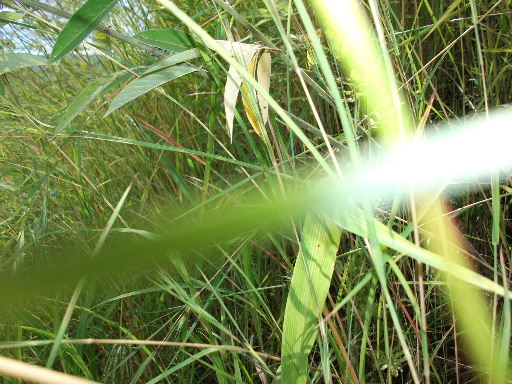 Paths winding through Deniza. I took the second photo at eye level.

Jean Romain, however, showed no sign of concern. He would send us with Elie. Jean Romain is 29, his parents’ eldest child. Elie is their youngest. He’s eleven, and doesn’t look a day older than that. So when Jean Romain told us that Elie would be our guide, I was more than surprised.

Now, I know that children grow up differently in different cultures. An American child is not a Haitian child. And even within Haiti, there can be big differences among the various ways that children grow up, differences that greatly affect what they are able to do and when. But I was still surprised to find an eleven-year-old able to guide two strangers through a maze of footpaths in an area well more than an hour from his home, able to hike with us uncomplainingly for over six hours through bright sunshine and heavy rain. He led us to the homes of people he barely knew, people who didn’t know him at all until they asked him who his father was. 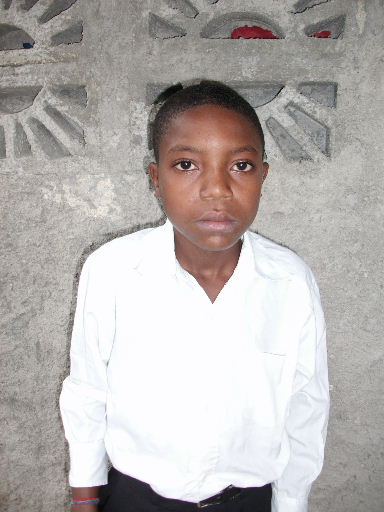 But that’s what Elie did: speaking only when spoken to, waiting patiently for Lenord and me when we fell too far behind, carrying Lenord’s water, but not presuming to drink any until it was offered to him, not eating a thing except an occasional wild guava until we all got back to the base and could eat together. When we returned to his parents’ house, he was giddy, pleased with himself for having discovered a series of little paths that he hadn’t known about before.

Elie is in school. He’s scheduled to leave Tit Montayn next week for his family’s apartment in Boukankare, where he’ll spend weekdays throughout the school year. He’ll hike home some weekends, but told me that he’ll stay down in Boukankare sometimes, too. The five-hour hike to get home is long. He’s fallen behind some in school, but not very far behind. He has to repeat third grade this year. Last year, he didn’t pass. But for all the academic skills that he may lack, he’s clearly a boy who knows a lot.