Colladere is at an intersection, about halfway between Hinche and Pignon, on Route Nationale 3 from Port au Prince to Cap Haitien. A right turn takes you toward Cerca Carvajal, near the Dominican border. The town is important to me because that’s where both Saül and Jidit are from, and it’s where her parents and his father still live. Jidit and Saül are my makomè and my monkonpè, the parents of my godson, Givens. They are more than friends. They are family.

The road is to Colladere is terrible, as bad as any major road I’ve experienced in Haiti. Colladere is probably less than 50 miles from Port au Prince, but just to get to Hinche can take four-five hours. And then it’s another hour to Colladere. So I don’t get there often.

I arrived Saturday morning at Kenise’s house. She’s one of Jidit’s younger sisters. They have three even younger sisters, women in their early twenties, and two older ones. They have an older brother, too. I know Kenise because when Jidit was pregnant with her first son, Cedric, she and Saül hired Kenise to work in their home. Kenise spent some time with them.

Then she went off to start her own family. She married a primary school teacher named Beny. They have two daughters. Da is four and Beka was born in August.

But that’s not quite the right way to put it. She has two daughters. Beny doesn’t have them anymore. Or, more precisely, they no longer have him. He died suddenly a couple of weeks ago.

On Saturday the 17th, in the late afternoon, Beny told Kenise he was going out to drive their goats home. That’s the last thing he ever said to her. He took a change of clothes, intending to bathe at the river, and went off.

When he hadn’t returned after a couple of hours, neighbors went looking for him, but had no success. Eventually, Kenise herself went out. It was after 10:00 by then. She figured that well-meaning neighbors wouldn’t look as hard as she would because Beny meant so much more to her than to them.

She was right. She found Beny lying naked at the river. He was already dead.

She telephoned Jidit right away, and Saül left by 5:00 the next morning to attend the funeral, which was held early afternoon. I went by Jidit’s Monday morning to check on her. She recently gave birth. Givens, who’s four, ran to tell me the news.

When I arrived on Saturday, Da ran up to me. She clung to me all through the day, hardly leaving my lap. This was new. She had been shy in the past. There could be various explanations. For one thing, it was the first time she remembered me from a previous visit. The last time I saw her was only two months ago. For another, two months is a long time in a four-year-old’s life. She could simply have changed. But it’s hard to avoid the suspicion that her father’s death, which I can’t imagine that she can understand, has left her missing his warmth. He was a very demonstrative, affectionate dad.

I know nothing bad to say about him. I saw him as a loving father to his own daughters, and uncle to his young nieces and nephews as well. I knew how Jidit and Kenise depended on him to help them help their parents, who are aging and who have two of their younger daughters – young women in poor health – to support. This much I have seen.

But his neighbors can not speak enough about his neighborliness. He was, it seems, someone they all counted on, too. He tended to teach the lower grades of primary school, and his students loved him. He was one of the two lay deacons that ran his church. I spent Saturday night with Saül’s family in Hinche. A young mechanic lives with them. His name is Tolo, and he grew up in the family’s home in Colladere, helping with the farming. When he came of age, he moved to their house in Hinche to learn a trade. But he used to walk to Colladere every Saturday to practice with a church choir there, walking back to Hinche on Sunday afternoon. Saturday, he told me he couldn’t go it was too sad. His church was Beny’s church, and he couldn’t bear to be there. He, a guy in his mid-twenties, wept openly as he explained.

Kenise herself told me that the death is simply a mystery. Beny, she said, was loved by all. She spent five years married to him and said that she had absolutely nothing to reproach him with.

But Beny’s co-deacon said that there’s reason to think that Beny was murdered. Not because he could imagine why someone would do such a thing, but because of the condition the body was found in. It will be hard to pursue the matter. The body was buried less than a day after it was found, and there is no police presence anywhere nearby. Kenise showed no interest in pursuing the matter as we chatted on Saturday, but the deacon is trying to make inquiries. 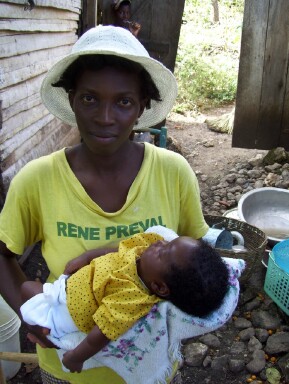 I suppose that, if Beny was in fact killed, I would be glad to see justice done, but I’m really more interested in Kenise and the girls. Da started preschool this year, and that is only one of the expenses that Kenise will have to deal with. Soon enough, she will have to turn her attention to how she will move ahead with her own and her daughters’ lives. She has a supportive family – supportive, at least, as they can be – but she’ll have to figure out a way to make a living. Since their marriage, she has worked only within their home.

I suspect that things will sort themselves out financially. More or less. Kenise is smart and capable, she has some basic assets – like farmland and livestock – to work with, and she has friends and family she can count on for help.

But as Da sat with me throughout the day, I kept having the same simple thought. Neither she or her little sister will remember the wonderful father they had. She and Beka, and Kenise and Beny, deserved much better than that.