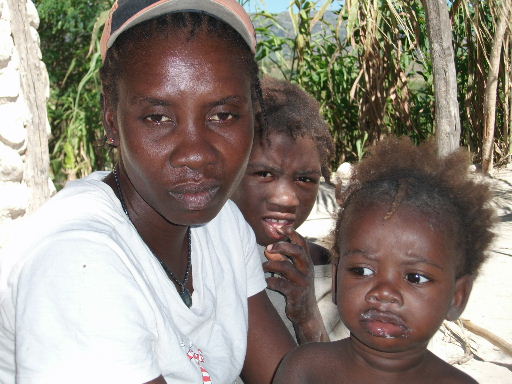 Ann lives in Giyòm, a roadless, hilly area between the town of Boukankare and the Artibonite River to its south. The area is sprinkled with houses and small farms, but mostly it’s an uncultivated grassland. There are some trees, but most have been cut down for cooking fuel.

The first thing she told us when we asked her how she was was, “Yo di, se gason ki mèt kay la. Men depi nèg la atè, ou nan dlo.” That means, “They say that the husband is the master of the house, but when the man’s laid up, you’re up the creek.” Her husband has been nearly paralyzed with back pain since early last summer, and so Ann’s been left to fend for him, for herself, and for six of their seven surviving children. The seventh lives as a household servant with a neighbor who has a home in Port au Prince. She gave birth to two others, but they did not survive.

Before her husband became sick, things were looking up. He gave her a crop of sweet potatoes to sell after last year’s harvest that was big enough that she was able to buy a horse. She even had some money left over to start a small commerce. A neighbor lent her an additional 5000 gourds — about $125 — and she was in business.

Then one day in late December, he came home with nice, new New Year’s clothes for all the kids. But he wasn’t feeling well, and he asked to lie down. Since then, he’s gotten steadily worse. Now he cannot rise without help. Since they have no furniture, someone sits behind him as a brace if he wants to sit up.

Then the horse died. And the neighbor needed her 5000 gourds back.

Ann was left with 1500 gourds of her own money. She would hike to the market with her little bit of capital to buy rice, oil, kerosene, and bouillon cubes and then sell them at a profit. But her husband’s illness and her need to feed her kids ate up what was left of her business quickly enough.

But Ann also said that “fanm pa konn pa devlope.” That’s like saying that a woman always has something cooking. She explained that, these days, she’s hiking into the hills to cut gwann, the leave of a miniature palm, which she dries and ties into bunches for buyers who come through her neighborhood about once a week. She can earn about five or six dollars in a good week, as long as the gwann lasts. She has a sister-in-law who sends her food now and then to help her feed her kids. Her oldest son’s godmother sends him to school, though he’s the only one of her kids who can go.

She’s not quite sure yet what she’ll do when the gwann season is over. She is worried about her husband’s recovery. “If he could even sit up,” she said, “or just go to the bathroom by himself, you’d have hope that he might be able to work again some day . . .” Her voice then trailed off.

She doesn’t know how long she can really depend on her sister-in-law. She’s not that wealthy herself. Her husband has a good deal of farmland, but right now she and her children have no way to work it. 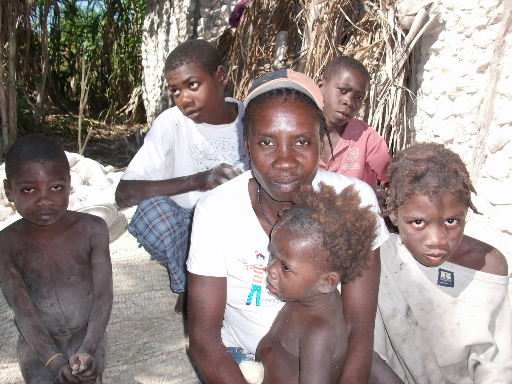