Marie Gedéon has made a lot of progress since we last spoke to her. When I first wrote about her, I called her “Ann.” (See: Introducing Ann.) In a second piece, I described her initial progress. (See: Ann, Part Two.) Her real name is Marie Gedéon, though she is often called by her husband’s name, Madanm Kapitèn. She’s a CLM member from Giyòm, living in an isolated home on top of a hill in the middle of that road-less, agricultural area of Boucan Carré. When we first met her, things were really hard. She was struggling, not always successfully, just to feed her seven children. Her husband, almost paralyzed, was unable to help at all.

Her sole source of income was the scrub palm she could collect from the hills where she lives. She would sell it to passing merchants, and make about five dollars a week. She was grateful for the occasional small bag of sweet potatoes her sister-in-law would give her. She joined the program with enthusiasm, explaining that “a woman always has something going on,” and she went right to work.

She caught her first break when her husband’s health improved. Within a few months of their entry into CLM, Kapitèn was healthy enough to help his wife care for the cow she received from CLM thanks to a special gift to CLM. And his health continued to improve. Now, over two years since he first grew ill, he is able to farm their land again. Their farming is important, too, because Marie Gedéon’s cash income is still weak. The farming that she and Kapitèn do is their main source of food for their kids.

Her cow has been doing very well. It gave birth to a healthy calf, which is flourishing. The excess milk that it produces beyond what the calf needs goes straight to her children. “I don’t want to sell the milk, because I want to make sure the calf has enough. But the kids enjoy drinking it, and it’s good for them.” 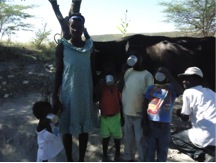 Her goats are now flourishing as well. She originally received two from the CLM program, and she bought a third with some of the money that she consistently set aside from her six months of food stipends. Setting that money aside cut into her ability to feed her family and send the children to school, but she felt strongly that her family’s future depended on her saving her money. So, she said, they just needed to be “resigned.” Eventually, two of her goats had kids, which brought her total to five.

But she knows that she will have to start a small commerce if she is ever going to be able to feed her children every day and send them to school, and that she lives too far from the nearest roads and centers of population to be able to develop a business without a horse to carry her merchandise. So she sold one of her larger goats, added the proceeds from the sale to savings from her food stipends and money she made by selling some charcoal and some of their last harvest, and bought a small horse. “I’m just not someone who can carry a lot on her head, and not many people will climb up to my house to buy anything I want to sell.”

So now she has a horse to carry her merchandise with, but still has no merchandise. But she’s not worried. She still has one young male goat, though it’s a small one, and she plans to sell it in a month or so, and use the proceeds to buy merchandise.

One last note: The interview that led to this story was held in Boucan Carré. Marie Gedéon had come to a one-day eye clinic that visiting American optometrists were offering to CLM members.

The clinic is not a regular part of our program, but we try to develop any contacts that come our way to get our members services that we know they need. Marie Gedéon didn’t feel the need to have her eyes checked. Her vision is good. But she knew we needed to speak with her, so she came by.

It was lucky that she did. While she was there, one of the optometrists checked her out. It turns out that she has early but clear indications of glaucoma. We gave her the drops she will need to use daily in order to save her vision.