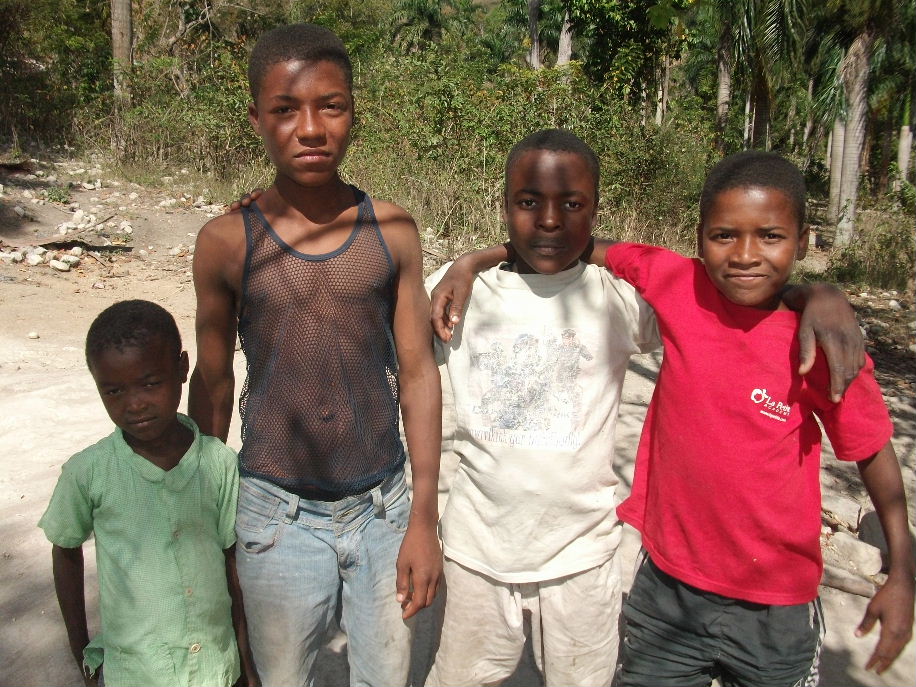 Raynold, second from right, with two little brothers and his older cousin, Bonel

I’ve written about Raynold before. He’s the teenage son of a CLM member from Anba So, a secluded neighborhood of Boukantis. He suffers from scoliosis, a sometimes-painful curvature of his spine that severely limits his activity. It means he can’t carry loads, he can’t comfortably walk the distances that rural life demands, and he sometimes even has trouble breathing. (See: Additional Services.)

Working with someone like him, who has very special challenges, takes much more than a case manager’s weekly visits can accomplish. As Raynold makes his own slow progress, it’s been encouraging to see how a network of powerful and committed organizations are working together to support him along his way. 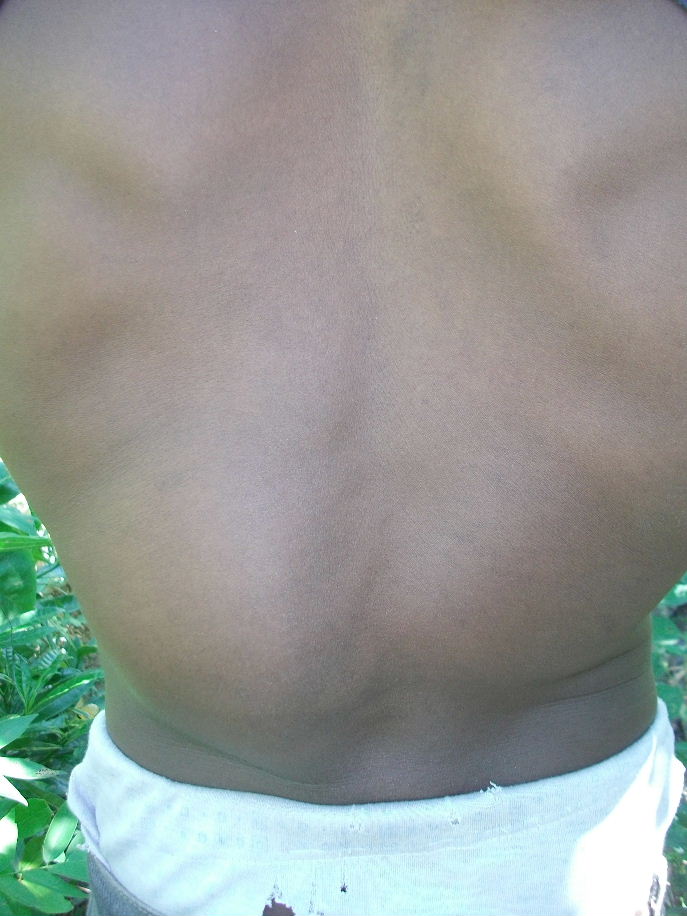 We first took him to see an orthopedist in Canje, the principal Partners in Health hospital. That first doctor was able to identify the problem, but he couldn’t do much more. He merely pointed out that it would be important for us to bring Raynold for regular check-ups because the scoliosis could get worse as Raynold grows, the spine not just bending but also twisting, and it could lead to further, more serious problems down the road.

But that doctor was not himself the last word in what Partners in Health could offer. Dr. Andrée Leroy, a Haitian-American back specialist, is on staff at their hospital in St. Marc, on the coast to the west of the region CLM works in. We brought Raynold to see her in late January. She spent a couple of hours with us, calling a pediatrician and another specialist to help her check him over thoroughly.

We learned a couple of things. Raynold’s scoliosis curves to the left, which is more rare than the right-curving sort. It’s probably congenital and goes together with his unusually short stature. There’s a standard way of measuring the severity of a curvature, and Raynold’s is serious enough that he would be a candidate for surgery if he were in the States.

But he’s not in the States. We don’t know of anyone in Haiti capable of what would be, Dr. Leroy said, a very difficult operation. And it’s an operation with a long and difficult recovery, so that even if we could send Raynold to the States for the operation — and maybe we could — we might have to keep him there for as much as a year while he was healing. We couldn’t do anything of the sort without interrupting his life with very unpredictable consequences. So Dr. Leroy proposed a less invasive approach. It has three parts: A brace, physical therapy, and an orthopedic mattress.

Unfortunately, Partners in Health doesn’t do bracing. On the other hand, Fonkoze has another partner that does. Fonkoze has worked closely with BRAC since we decided to establish CLM. The program is, in fact, a Haitian adaptation of an approach that BRAC originally developed in Bangladesh. Shortly after the earthquake struck Haiti in 2010, BRAC established a limb and bracing center in Pétion-Ville. We contacted BRAC’s Haiti office and within days had arranged for Raynold and his mother to spend four days at the center while they take his measure, make the brace, and then ensure its proper fit.

While he was in Pétion-Ville, I arranged some extra work for him. Raynold has never been to school for a full year. It was only in the day and a half that he spent in our office so we could bring him to St. Marc that he learned to write his name. He showed that he really wanted to learn. So I asked Mackenson, a high school student who lives near me in Kaglo goes to school near the BRAC center, to spend a couple of hours a day with Raynold, starting to teach him to read. They took a literacy reader that was written by Laurence, Fonkoze’s Director of Education, and worked really hard for those three days. Raynold has already made a good start, and continues to work with his cousin Bonel, at home.

That’s not Bonel’s only role in Raynold’s story. Ten days after he got the brace, we took Raynold back to Cange to meet with Megan Brock, the American physiotherapist on staff there. By then, Raynold was already reporting that he was pain-free. As long as he has the brace on, he doesn’t feel back pain anymore.

Megan thought it would be useful for Raynold to have a family member with him who could help ensure he would stick with the program. It would have to be someone he’s comfortable with, but someone who’s a little older too, someone with the authority to push him a little. He chose Bonel. Raynold’s the oldest of his mother’s ten surviving kids. They live next door to his aunt and uncle, Bonel’s parents, who also have ten kids. It’s quite a collection. 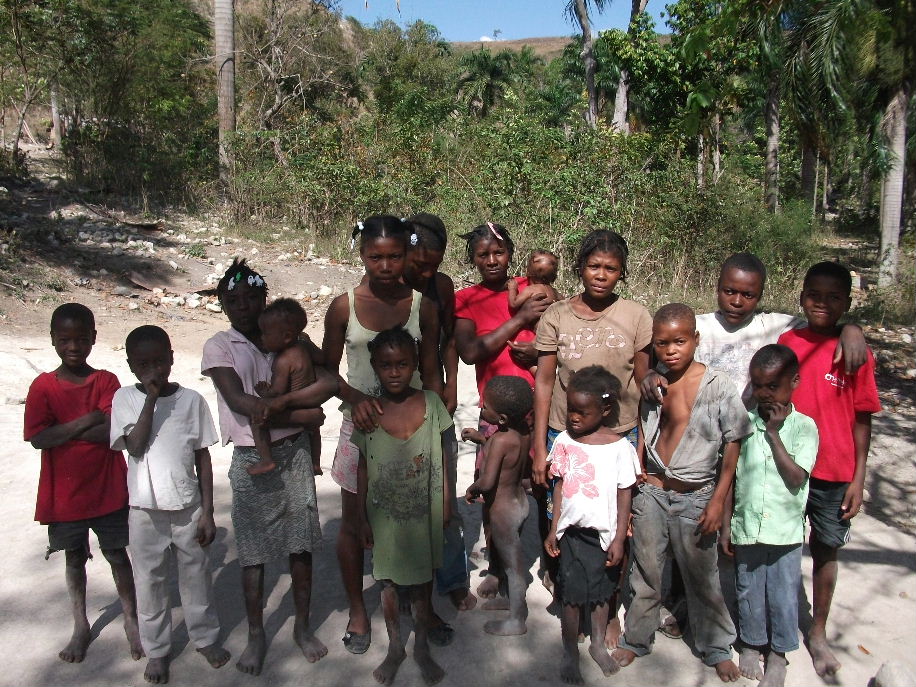 //Raynold with a sample of siblings and cousins. A couple of aunts squeezed themselves into the photo as well.//

Bonel is eighteen, three years older than Raynold, and he’s his closest friend. Bonel’s been to school for several years, and can both read and write. And it turns out that he’s willing to help out a lot. He took a day off from school to go to Cange with us. Megan spent the whole morning with us, developing a program for Raynold and teaching him and Bonel how to do the exercises. They are now doing the exercises regularly in Raynold’s home. 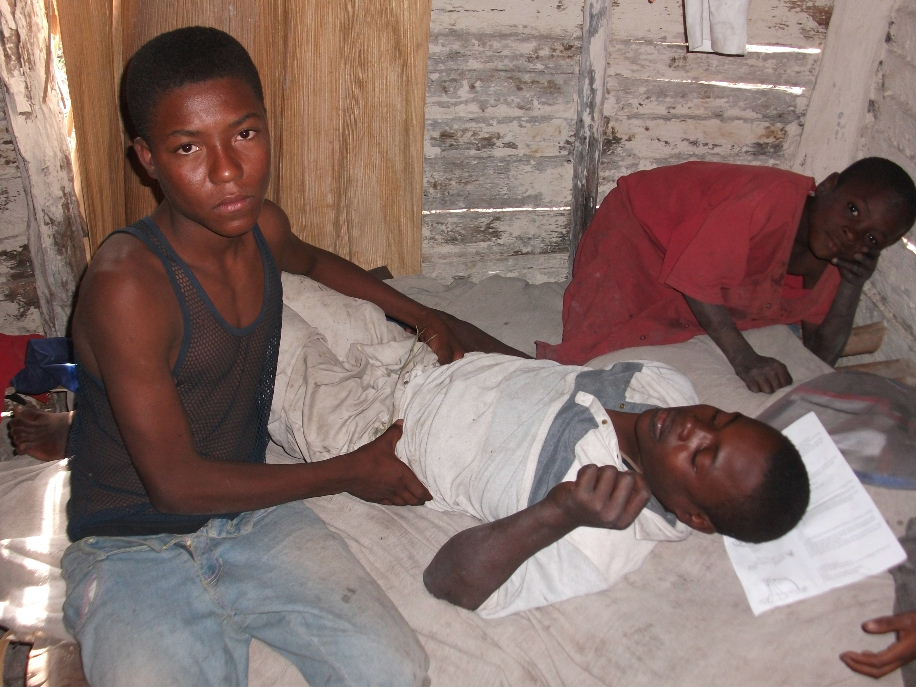 We haven’t yet looked at whether we’ll be able to help Raynold’s family acquire an orthopedic mattress. For the time being, they would yet have a space to put one in. His mother, Antonia, is only just beginning to organize herself to build the new house we’re helping her construct. We provide roofing material and nails, and we pay the people who build up the walls and put on the roof, but she’s responsible for the lumber. She’s started to collect it, but she’s not finished yet. Unfortunately, her husband’s not much help. Their current house isn’t dry enough to protect an expensive mattress. We’ll have to wait and see.

For now, we’re just excited to see the progress Raynold’s made. And it’s been especially encouraging to see how a larger community of people, each of whom had something unique to offer — from Dr. Leroy and Megan to Mackenson and Bonel. Each has been willing and able to contribute importantly to one young boy’s well being. I don’t know what will become of Raynold, but his life is already better than it once was.